It’s the end of the world as we know it, we feel fine! -REM

Last year, I would’ve never guessed that we would be leaving a static, 9 to 5 corporate job making good money to explore, learn, and travel the world. I had plans to move up in the corporate world, at least it seemed like a good idea, but it later blew up in my face for unknown reasons.  I also thought my son starting Kindergarten was  going to be an exciting new adventure, which it is and was, but I’m learning he needs more of a one on one learning style. Somehow our family is being led to a life of learning what else is out there. We thought we arrived by getting that big house, driving the fancy cars and making a combined income making over six figures, but as humans we evolve over time and I’m learning that’s ok.

Our first sign of a travel life was seeing a family on Youtube of eleven travel the world. We thought how in the world are they doing that? We took a trip to North Carolina before we were inspired by the Youtube family and we were so in bliss from the trip on the way home we started brain storming on ways to work on the road so we can have more time with our family and see the world. When we got home, I started to randomly read a book called the Total Money Makeover by Dave Ramsey which soon there after led to paying off debt. Once the debt started to dissipate we learned that we were spending a lot of money to live in the suburbs just to work and maintain our possessions. We wanted out, we were merely existing and not living. 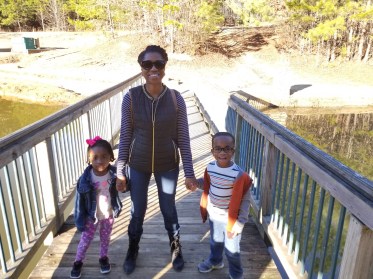 It’s funny how life works, when you put your mind to something and the universe or God literally starts sending it your way. You just have to be open, aware, and see it as opportunities when they start to show up. I have no idea why I decided to read Total Money Makeover that day or why shortly after that my husband discovered a Youtube channel of a traveling family. They could in fact be all coincidences we just put together to make work, whatever it is, I’m happy with what it turned out to be, considering the fact I wasn’t really happy with the life I was living. I really haven’t been this excited about anything in a very long time.